In total, we performed 650 euthanasias for health or behavior resasons and 94 owner requested euthanasias.

While they were many, one of the major successes was a 33% increase in adoptions. In 2014, we doubled the number of adoptions compared to our first year in 2012.

We also increased the number of animals returned to owner by 17%.

Another major success was a decrease in the number of animals that died in our care by 25% (In spite of the increased intake). Improvements in our training programs, veterinary clinic, parvo ward and in our ability to find even more good fosters for juvenile kittens has really improved our success there.

In January 2012, KC Pet Project embarked on a journey to take what once was a high-kill Kansas City municipal shelter and turn our city into a No Kill Community.

In July of 2013, we celebrated our first 12 consecutive months at operating above a 90% Live Release Rate.

In spite of many challenges in 2014, KC Pet Project had another amazing year of growth, success and recognition.

In March, KC Pet Project opened a second satellite adoption facility. This one, a 2,000 square foot space inside a Petco retail store. 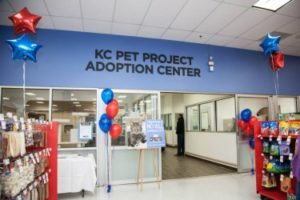 This location, along with our first satellite adoption facility in Zona Rosa Shopping Center, have been crucial for the increase in adoptions, and thus lives saved at KCPP.

In November, our Zona Rosa location celebrated its 3,000 adoption — in less than 2 years of being open.

In May, several folks from Kansas City Pet Project were invited to San Diego to receive a major award. KC Pet Project was honored to be selected by the Petco Foundation to receive the first ever Paul Jolly Compassion Award. 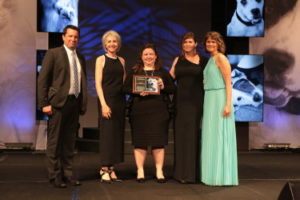 Paul Jolly was the founder of the Petco Foundation 15 years ago — with the idea that he could leverage the strength of the nation’s largest pet retailer and help pets in the process. Mr. Jolly passed away earlier this year due to ALS. The Petco Foundation chose to create the Paul Jolly Compassion Award to give to individuals or organizations that turned their compassion for animals into action — and KC Pet Project was the first ever winner. I couldn’t be more proud.

KC Pet Project also was invited to present our story at the Best Friends Animal Society Conference, American Pets Alive Conference, No Kill Columbia, 1 Million Cups, and at the Missouri Animal Control Association Conference. We also received the Community Engagement Award as a part of the ASPCA 100K Challenge. We received generous grants from Best Friends, ASPCA, HSUS the Petco Foundation and generally our number of donors and donations have risen substantially.

The biggest challenge this year was handling the 16% increase in total intake (+10% on dogs, +28% on cats) on the year. This number was MUCH higher earlier in the year (it was more than 21% YOY in July) and finally tapered off toward the end of the year.

While animal control impounds still make up most of our intake (45%), the vast majority of the increases were from Owner Surrenders (+53%) and public stray dropoff (+16%).

And generally, our very small, outdated, 42 year old shelter continues to be a challenge as, at 14,000 square feet, is roughly 1/4 the size of a shelter that would be necessary for an intake of roughly 10,000 animals.

We also continue to struggle with the large number of breed bans in our region that are causing many pit bulls to become unnecessarily homeless and also eliminate many potential homes for the ones that are in the shelter.

We are also seeing more and more shelters in the area make it increasingly difficult, if not impossible, for people to surrender their pets which is pushing more people toward KC Pet Project. It is a huge concern for KCPP that if intake continues to increase at the current rates, that the size of the shelter, and the significant increase in intake (now up 40% in just 2 years) will put a huge strain on our ability to save lives at the current rate.

Overall it’s been another great year at KC Pet Project and we’re very proud of the success and growth of the organization as a start-up organization just 3 years ago.

We’re very excited for the year to come as we have a lot of new initiatives that we are looking forward to sharing.

Vote passed for funding for a new KCMO Animal Shelter

KCPP awarded the first ever Paul Jolly Compassion Award by the Petco Foundation.